Once upon a time, there was a girl from a small town in the Caribbean that wished to become a writer. However, when she told others, they all told her: “People from small towns can only accomplish small dreams!”. Nevertheless, she set off to pursue her dream and one day… she achieved it! That girl (now a woman) has answered all my questions about her writing and her published book in this interview, because that woman is Sara Collins! 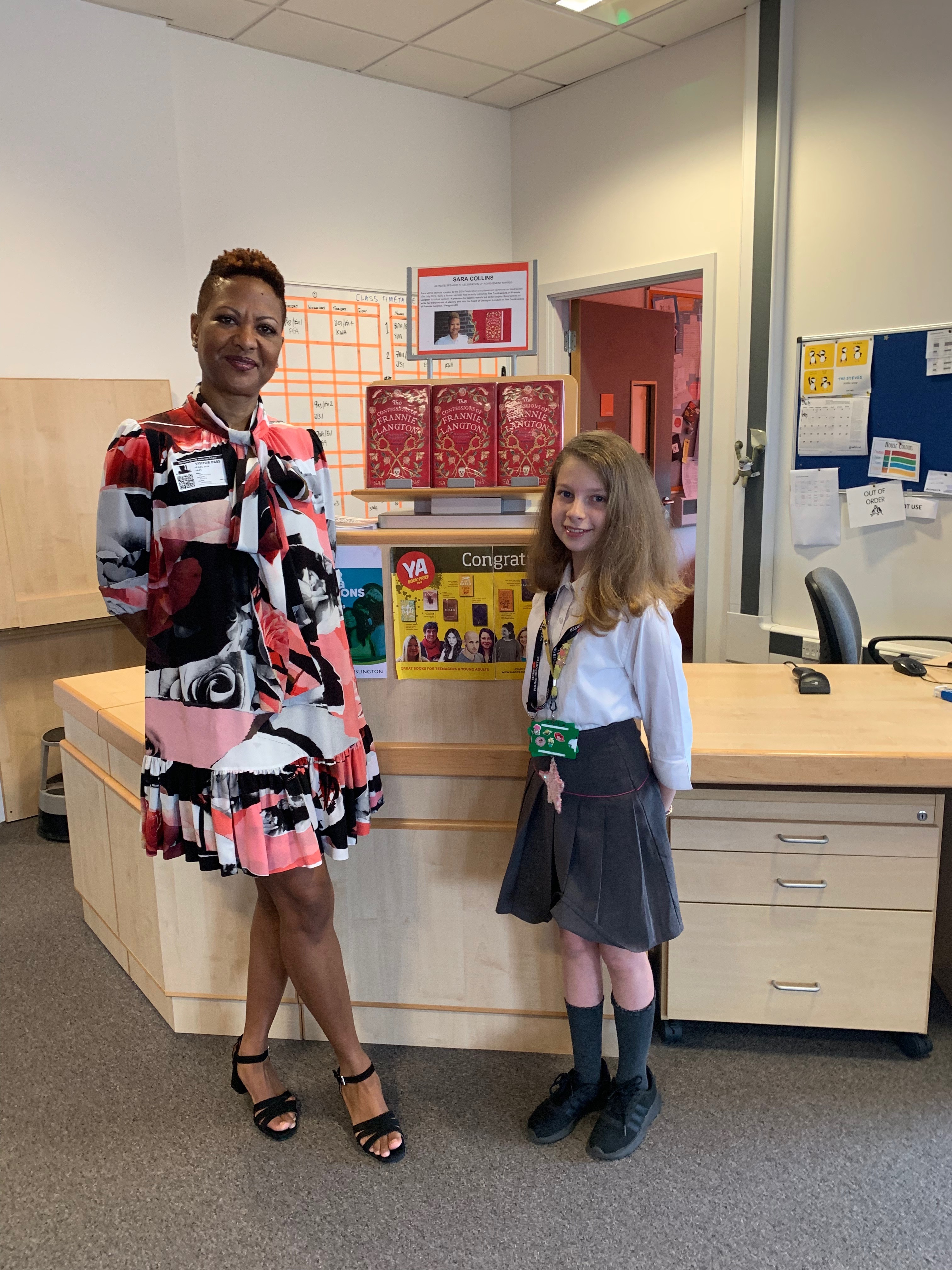 I’ve been reading your novel ‘The confessions of Frannie Langton’, and being as it’s not really a book for my age, I am finding it quite challenging, but also very interesting. What or who inspired you to write your book?

“I think the main thing that inspired me to write it was the fact that I loved that kind of book. As a teenager I read all of the classic gothic romances that I could get my hands on. My favourites were ‘Jane Eyre’, ‘Wuthering heights’ and ‘Rebecca’, which all influenced my novel. After a long-time reading books like that, I became very fed up with the fact that there were no protagonists in those novels who had anything in common with me, where I was from, and my background. I grew up on a small Caribbean island, and I’m a black woman. One thing I wanted to very strongly, was to make a black woman the star of her own gothic romance. So that was my major reason for writing my own gothic romance and for having a protagonist like Frannie. ”

When you see a finished piece you just see a result of hard work, and you don’t see all the effort and research behind, which obviously anything has. How did you research for your book?

“So true that the finished piece is only a very, very small part of the picture. Often a lot of mess and chaos happens in the background. Before my book, I started not really knowing what questions I wanted to answer and as a result I did a lot of research. I read as much as I could about what people ate, what they wore, how they travelled, and what things looked like in the 19th century. I read lots of novels that had been written in the 19th century, because that’s when I was setting my novel. I also visited the places I was writing about: I went to an old plantation in Montego bay and stood there for most of an afternoon and just tried to imagine what it must have been like to have stood there two hundred years ago. I also walked through Mayfair and did the same. The more I wrote the more I knew what I wanted to find out, and that was when the research became easier. Towards the end of when I was writing the novel, I would only research something I needed the answer to. So, if I had a question, I would go and look the answer up. Otherwise, I would try not to research because researching doesn’t get novels done, it’s just a way sometimes to avoid writing when what you really have to do is write.”

When you write a book there are a lot of ideas and sometimes it’s hard to squish them all into one story. It’s either that or sometimes you do manage to fit them all in but they get cut off. Was there anything that got cut off in your novel?

“That’s a really good question. Actually, I think the one big lesson I learnt is that writing a novel is as much about what you take out as what you put in. Sometimes what you’ll find is that a piece of writing isn’t finished until you’ve deleted the thing that’s in the way. So, with a novel it’s very important to know what story you’re telling and how you’re going to keep it exciting.  It can be by making the pace very quick and by making people want to turn pages. Sometimes writing has to be taken out if it doesn’t serve any of the previous purpose, even if it's you’re really proud of it, or something that took you a long time to research.

For me one of the biggest things that I had to cut was an entire story. The novel was originally written from three different points of view: one was Frannie’s, one was George Benham’s (the man she ends up working for in London), and the other one was from the point of view of his wife, Madame Benham. I spent about six months researching and writing a thousand words of Madame Benham’s story. Unfortunately, I had to chop it: everything had to go. As soon as I’d done that, I realized that I actually had the novel that I needed.”

Gothic fiction novels express love, fear, and death. These are quite delicate topics but a good gothic novel usually embraces all three. Have you always been into gothic fiction even as a child?

“Yeah, I think we answered that. One of my first reading loves were Gothic novels that were some of the first grown-up books. Ever since then I’ve had this kind of affection for books that are trying to scare you in some way. I went through a big Stephen King phase. Don’t know if you’ve come across him yet? I do think there is something about the gothic novel, and even those dark things and the themes that you mentioned, create a kind of suspense that makes them very exciting to read.”

Most writers have little writing habits for example Agathe Christie munched apples in her bathtub while envisioning murder mysteries, or Maya Angelou would go to a tiny, bare hotel room, and write, bringing with her only a bible, deck of cards, and a bottle of sherry. Do you have any writing habits of your own?

“I love this question because I do and I became very superstitious about my writing habits, that may not be a good thing. It took me two years to write my novel and I became quite set in my ways about doing things the same way every day while I was writing. What I discovered was that if I followed my routines it prepared me mentally for writing, and I would know as soon as I started that it was time to write. My brain would switch into gear and the writing would become easier. I got very disciplined about starting and finishing at the same time, having my coffee at the same time, but I had two habits that were very fun for me. Every day before I started, I would read some poetry. My favourite poets at that time were Mary Oliver, Kei Miller, and Ocean Vuong. I would also play music. I would blast music as loud as I could especially if no one else was in the house. My favourites were Kendrick Lamar and Jay – Z. I used to call it my fighting music, like when a boxer is getting into the ring and getting all worked up. That would be my kind of hype music, that would get me in the mood and make me feel energised. Then suddenly I would switch to something very slow or classical, that would be a calmer, gentler background noise for working. So those are my two routines that I never changed and now that I’m not really writing every day, I miss the poems and the music the most.”

We all know that in everything we do there are easy aspects and difficult aspects. And it is exactly the same for writing too so, what is the most difficult part of writing for you?

“For me, no question, hands down, it was doubting myself. I knew I was good at writing as teachers and other people had told me as I was growing up. Knowing that you’re good at writing is really different to being able to finish a novel which takes a long time and requires you to be really dedicated. I felt like giving up often because the thing they don’t tell you about writing a novel is that it comes out quite messy and often very unimpressive. The first drafts can be really terrible and if you’re someone who doubts you can think ‘Oh, I’m never going to improve this!’. So, that happened and I kept on having to talk myself out of giving up, because I started to doubt that I’d be able to finish it to the standard that I wanted.”

Are you friends with any other authors? If yes, how do they help you be a better writer? If no, which author would you like to be friends with and why?

“I am friends with other authors, and that is one of the most fun things about being a published author. I should give a shout out to your librarian, Ms Cheetham, who is one of my writer friends. There are a number of others, but the biggest thing we do for each other is to encourage each other. Friends do that generally writers or not. However, being writers, we understand the unique stresses of being an author and having books published. We can encourage and comfort each other when times are difficult. We can also celebrate our achievements. I find that a huge source of support.”

Thank you for reading my Seven Questions with Anna 2018-2019, I will be back next academic year with many more surprises!!

Well done to Asmaa in Year 11 She gave a really insightful and knowledgeable  talk, informing us about the health benefits of veganism  and how vegan ingredients can be used as substitutes in everyday recipes! For those interested in making changes to their diet, here is a link to Asmaa’s powerpoint.
Posted on: 12/11/2020